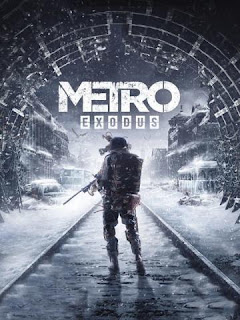 ATTENTION! The minimum size of the repack is just 32.7 GB, read repack features for details.

A quarter-century after nuclear war devastated the earth, a few thousand survivors still cling to existence beneath the ruins of Moscow, in the tunnels of the Metro.

They have struggled against the poisoned elements, fought mutated beasts and paranormal horrors, and suffered the flames of civil war.

But now, as Artyom, you must flee the Metro and lead a band of Spartan Rangers on an incredible, continent-spanning journey across post-apocalyptic Russia in search of a new life in the East.

Metro Exodus is an epic, story-driven first person shooter from 4A Games that blends deadly combat and stealth with exploration and survival horror in one of the most immersive game worlds ever created.

Explore the Russian wilderness across vast, non-linear levels and follow a thrilling story-line that spans an entire year through spring, summer and autumn to the depths of nuclear winter.

Inspired by the novels of Dmitry Glukhovsky, Metro Exodus continues Artyomâ€™s story in the greatest Metro adventure yet.

Embark on an incredible journey - board the Aurora, a heavily modified steam locomotive, and join a handful of survivors as they search for a new life in the East
Experience Sandbox Survival - a gripping story links together classic Metro gameplay with new huge, non-linear levels
A beautiful, hostile world - discover the post-apocalyptic Russian wilderness, brought to life with stunning day / night cycles and dynamic weather
Deadly combat and stealth - scavenge and craft in the field to customize your arsenal of hand-made weaponry, and engage human and mutant foes in thrilling tactical combat
Your choices determine your comradesâ€™ fate - not all your companions will survive the journey; your decisions have consequence in a gripping storyline that offers massive re-playability
The ultimate in atmosphere and immersion - a flickering candle in the darkness; a ragged gasp as your gasmask frosts over; the howl of a mutant on the night wind - Metro will immerse and terrify you like no other gameâ€¦

Based on Metro.Exodus-CPY ISO release: cpy-me.iso (54,469,939,200 bytes)
100% Lossless & MD5 Perfect: all files are identical to originals after installation (ONLY when installed with ALL voiceovers!!!)
NOTHING ripped, NOTHING re-encoded
Selective Download feature: you can skip downloading and installing of bonus content (OST + Artbook) and voicepacks you don't need
Significantly smaller archive size (compressed from 50.7 to 32.7~35.9 GB, depending on selected components)
Installation takes: ~40 minutes on 8-threads CPU + HDD; ~1 hour 20 minutes on 4-threads CPU + HDD; installing on SSD is around 30% faster
After-install integrity check so you could make sure that everything installed properly (ONLY when installed with ALL voiceovers!!!)
HDD space after installation: up to 51 GB (52 GB during installation)
Language can be changed in game settings
At least 2 GB of free RAM (inc. virtual) required for installing this repack
ATTENTION! If you're installing this repack under Windows 10, run setup with compatibility set to Windows 7
Repack by FitGirl

You can skip downloading of bonus file and voicepacks you don't need. Here is the list of selective/optional files. You MUST download at least one of speech packs.